Mary Ellen Mark was an American photographer known for her work in photojournalism, documentary, portraiture, and advertising.

She addressed such social issues as homelessness, loneliness, drug addiction, and prostitution. Children were a reoccurring subject throughout much of her work. She described her approach to her subjects: “I’ve always felt that children and teenagers are not “children,” they’re small people. I look at them as little people and I either like them or I don’t like them. I also have an obsession with mental illness. And strange people who are outside the borders of society.” 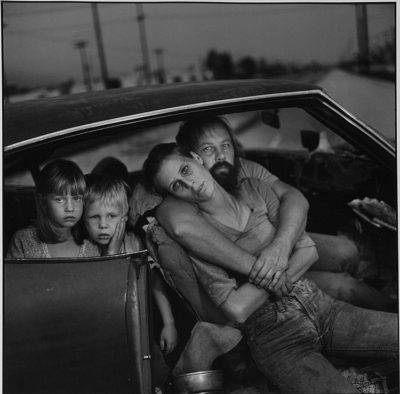 It’s a phenomenon I’ve noticed myself: people and objects that appear broken-down, damaged, crumbling, adrift, often make for beautiful photographs. When I lived in Sicily, my apartment was in an 18th century palace that looked like it hadn’t seen a lick of paint in 150 years, and might collapse into the street at any moment. Yet it had withstood centuries of earthquakes and was a wonderful place to live.

This photo by Ms Mark shows a Californian family who had fallen on such hard times that they had been living in their car for two years.

They all look done in, but not defeated. There’s a lot of love in this beautiful picture.