Empathy, Humour, and Concern: the Photography of Dan Weiner

Daniel Weiner (1919–1959) was an American photojournalist, best known for his empathetic and sometimes humourous photographs of New Yorkers, and of the Civil Rights Movement of the late 1950’s.

He covered the Montgomery, Alabama bus boycott, led by Martin Luther King, Jr., which is recognized as one of the seminal events of the burgeoning civil rights movement. He was what you might call old-school left-wing (by US standards), although he did much of his photographic work for publications such as Fortune magazine, The New York Times, Harper’s Bazaar, and Collier’s – none of these august journals could be labelled hotbeds of communist propaganda.

He was also majorly involved in a co-operative called The Photo League, which maintained studios and darkrooms, and who aimed to use photography to effect social change. They were blacklisted in 1951 by a minion of the McCarthy committee on un-American Activities. 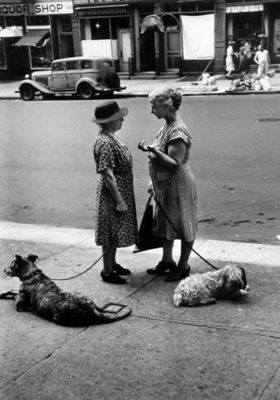 He began life as a painter, turning to photography after learning the craft in the Army during WW2. His life was tragically cut short in a plane crash in Kentucky during a freak snowstorm.

Examples of Dan Weiner’s photographs are included in the permanent collection of the Museum of Modern Art, the Metropolitan Museum of Art, and the International Center of Photography in New York, and the San Francisco Museum of Modern Art in California, among many others. I can’t find if his work is on display – permanently or in a show – in the UK just now.

I’ve always loved this picture of two New York ladies and their pets. The pooches are so bored they’re not even talking to each other.