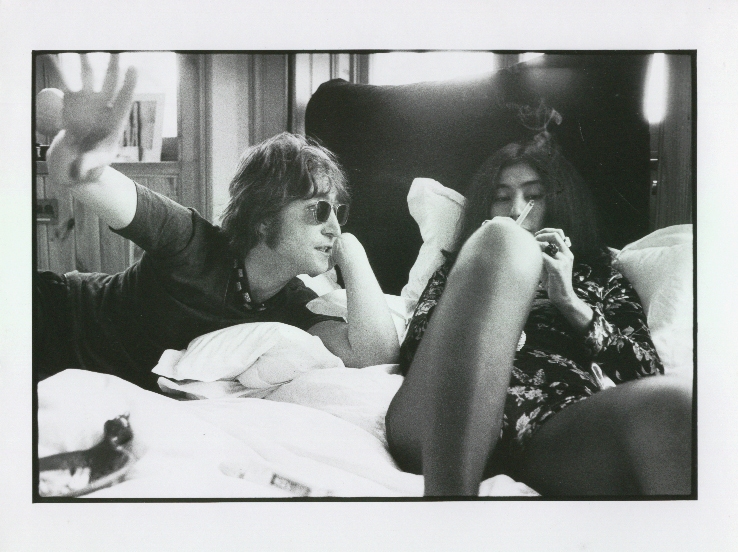 I began my career as a photographer in Dublin and moved to London in 1970. In April 1971, I was sent by the weekly rock paper ‘Sounds’ to photograph JL recording what would become the ‘Imagine’ Album, at his home in Surrey. Meeting him was the high point of my life up to that time. I’d never met anyone so famous and still haven’t. They’d been recording all night and sleeping during the day. I got there at five o’clock in the afternoon and he was having breakfast. Seeing him tucking into eggs & bacon just like us ordinary mortals seemed somehow amazing to me.
I stayed for the rest of that night’s recording watching a new masterpiece take shape before my eyes, with John singing and playing, George playing slide guitar and Phil Spector issuing instructions from the control booth. They were recording “How do you sleep?” which caused great friction between him and Paul McCartney.

John said he’d call me when the album was finished. Six weeks later, he rang to see if I was free to come down the following Saturday. It was a beautiful summer’s day and we spent hours wandering around the gardens and chatting. I was dying to hear the album, and it dawned on me that John was very nervous about unveiling his new work. He finally left me in the famous white sitting room to listen by myself, saying he couldn’t bear to hear it any more and that I was the first member of the public to hear the new album. He said he wanted my honest opinion. So – I was to give feedback to one of my heroes, to one of the greatest songwriters of the 20th century. No pressure then.

The album didn’t yet have a title, and the vinyl disc only had a blank white label on either side: not even song titles. From the opening bars it was clear that I was hearing a masterpiece. I played it through 3 times straight, and each time it sounded better. On returning to join John in the garden, he was genuinely keen to know what I thought. He actually asked me if I thought it was ‘any good’. I quickly ran out of superlatives.

I felt strange having to reassure one of my heroes that his new work was an instant classic – and it got worse: at a certain point, I got that I wasn’t convincing him. I said I loved his previous album and played it all the time in the darkroom. I mentioned that it had a bleak feel to it, which he agreed with. I then said the new album was more accessible. He was horrified. “I can see the headlines now” he said. “Lennon sells out”.

In a BBC poll just before the millennium, “Imagine” was voted the greatest song of the century.